‘A giddying fusion of Scottish culture and jazz history’ – The Times

The award winning jazz pianist and Mercury Prize nominee joins us for a very special show at Fruitmarket Gallery Warehouse.

Fergus McCreadie is one of the most exciting young jazz pianists on the world stage. With his unique blend of Jazz and Scottish folk music inspired by his country’s sublime landscapes, Fergus captures the hearts and minds of audiences worldwide. He is undoubtedly a future star in the making.

Released on Edition Records to instant critical acclaim, Forest Floortopped the UK Jazz & Blues charts, prompting sold-out performances at Queen’s Hall, Edinburgh and Love Supreme this summer. Fergus is the only non-classical musician to be selected as a 2022 BBC New Generation Artist.

Fergus has an innate depth, flair and natural expression that communicates beyond his years. His ability to transition from a full flowing, radiant pulse-wash of sound to a tranquil, first light stillness in a moment is simply breathtaking. Whilst his music is built on the folk traditions he has grown up with, it’s the versatility of rhythm and colour, from the most delicate shades to the highest energy, that’s captivating.

Forest Floor, its artwork and aesthetic, develops the themes of Fergus’s repertoire. Whilst his second album ‘Cairn’, released on Edition Records in January 2021, focussed on the permanence and beauty of Scottish stone, Fergus felt that this album had a greater earthiness to it, illustrated by the changes the seasons produce on the forest floor, a perception that fed into the concept for the new work. The connection to Fergus’ locality, the nature and landscapes of Scotland, provides his music with huge appeal that goes beyond jazz and music.

The album was shortlisted for the 2022 Mercury Prize with Free Now. 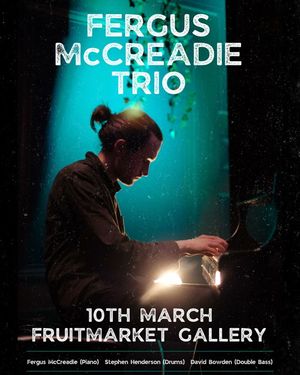