The Queers are an American punk rock band, formed in 1981 by the Portsmouth, New Hampshire native Joe P. King (a.k.a. Joe Queer) along with Scott Gildersleeve (a.k.a. Tulu), and Jack Hayes (a.k.a. Wimpy Rutherford). With the addition of Keith Hages in 1982 the band started playing their first live shows. The band originally broke up in late 1984, but reformed with Joe Queer and a new line-up in 1986. In 1990, the band signed with Shakin' Street Records and released their first album Grow Up. The album earned the band notability within New England, but with the release of their next album 1993's Love Songs for the Retarded, on Lookout! Records, their following grew larger.[4]

In 2006, after releasing six albums on Lookout! Records, the band rescinded their master rights from the label, citing breach of contract over unpaid royalties. Later that year they signed with Asian Man Records.

the Queers play a Ramones-derived style of pop punk. Much like The Ramones, common lyrical themes are of girls, love, drugs, alcohol and having fun. Musically the band deviates slightly from the driving rhythm guitar sound of the Ramones and augments their songs with harmony vocals and guitar solos. They have been described as "The Ramones meets The Beach Boys" 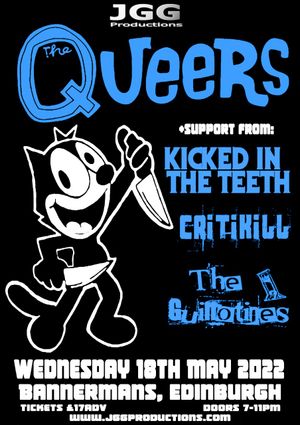