The Tomorrow Band are a Scottish funk 'n' soul supergroup.
Made up from different established acts (Blue Rose Code, Horse, Scottish National Jazz Orchestra, James Brown Is Annie, to name but a few), they started out life at the Edinburgh Jazz & Blues Festival playing their debut, Creative Scotland-funded album, Inside/ Outside, in its entirety alongside producer - Average White Band soul legend, Hamish Stuart. Since then, the big band RnB outfit have performed Sell Out shows at Pizza Express Jazz in London, and Peggy's Skylight Jazz Club in Nottingham. Later this year, they will be laying down the grooves at Eden Court in Inverness. Meantime, get up, get down, and get into it with TTB when they hit up the Hard Rock Cafe in Glasgow. Just don't forget to bring your dancin' shoes with you.


"Down tools, take five and shimmy" (BBC RADIO SCOTLAND)
"Keeping the funk flame alive" (DAILY RECORD)
Support is provided by new Glasgow band The Meissner Effect who will bring their brand of funk/jazz/rock. The band formed during lockdown and are in the midst of recording a debut album. The band has released 2 singles to date which are available on YouTube and on digital streaming and download platforms.

This is a bill not to be missed for those that like funk with a side order of rock. 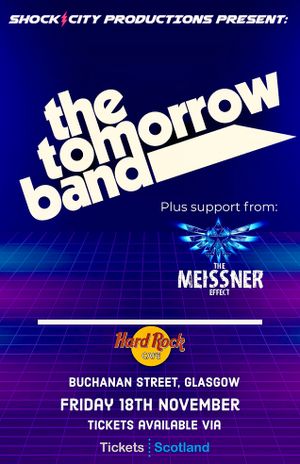