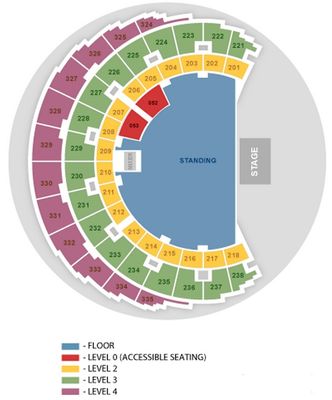 With almost two years since its last UK concert, the anticipation for the return of Hacienda Classical. the widely praised orchestral clubbing series with DJ Graeme Park, Manchester Camerata and special guests has remained high.

As concerts and events come around again, allowing us all to come together, the award winning show is to return to Glasgow’s SSE Hydro Arena Saturday 16th October bringing its brand new set for 2021 to north of the border audiences for the first time.

In the press, the Sunday Mail declared it “absolute genius” and “a dream” while Glasgow Live added that Hacienda Classical was “something unique, something that could only come from the Hacienda. Superb.” The Wee Review summed it up here. “The sound is truly fantastic. The Manchester Camerata orchestra blend brilliantly with original Hacienda DJ Graeme Park in recreating a mash-up of house classics.”

The event also marks the first time Hacienda Classical has appeared in Scotland since receiving a Scottish Music Award for innovation along with DJ Graeme Park in December 2020 which shows the popularity of the show in the country.

As Hacienda Classical headlines the SSE Hydro for the first time in some four years and with the concert marking our only scheduled Scottish date for the year, demand is expected to be swift.

Now entering its sixth year, Hacienda Classical has performed to audiences of well over half a million in person, with more reportedly tuning into its successful streams during 2020. The collaboration between The Hacienda, Manchester Camerata, DJ Graeme Park and musical director, Tim Crooks has proved remarkably enduring, especially with the set being updated each year.

Hacienda Classical will again include orchestral renditions of much loved classic club records from The Hacienda’s heritage, bringing new additions and arrangements of seminal tracks to the set, adding to the repertoire of the tracks the show has produced.

Graeme Park commented; “After a year of frustration, I'm excited that Haçienda Classical is back to thrill the nation with positivity and love. I've never been more ready to return to the stage with the whole crew to share the joy with some big new songs as well as some massive favourites too. I'm pretty sure the country is ready to share the love too.”

Tim Crooks added; “I’ve spent the past year thinking how incredible the post-lockdown gigs will feel, and the long wait is finally over. I can’t wait to feel the noise and see that pent-up energy explode. It’s going to be something very, very special...”

With Hacienda Classical at a mixture of outdoor, indoor, club and concert parties this year, the first outing for the new set comes with this seaside visit Sunday 29th August to Blackpool Cricket Club. With Castlefield Arena sold out for the fifth time in September, Hacienda Classical’s only other Manchester date of the year is at Depot Mayfield Saturday 12th November while Hacienda Classical comes to Printworks London Friday 15th October for its only 2021 date in the capital and is back to Glasgow Saturday 16th October 2021.

As Hacienda Classical headlines the SSE Hydro for the first time in some four years and with the concert marking our only scheduled Scottish date for the year, demand is expected to be swift. 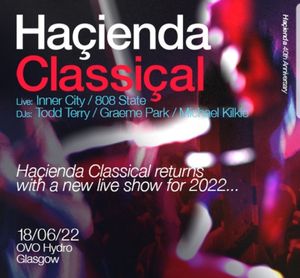