The world of An Dannsa Dub

Standing at the lesser-travelled crossroads between traditional Celtic music and the realm of the Soundsystem community, An Dannsa Dub ("The Dub Dance", in Scots Gaelic) have been pioneering the unique sound of 'future dub from ancient Scotland' .

This is their first show in their home city of Glasgow after a whirlwind summer of high energy sets at some of the UKs wildest festivals and it's set to be massive!

An Dannsa are pulling out all the stops to make this a night to remember. The concept of the night is to meld the mystical elements of traditional Celtic & Dub music together and the line up has been hand picked from local and international live acts that represent this. We will be powering the sound for the night using a custom built dub soundsystem North Fire Sound System.

Alongside the musical feast were also laying on a fully immersive otherworldly environment by set designer Jenny Booth, a traders market featuring Raggamuffin Records, CBD Tec and more, circus performers, visuals , lasers and the whole show is hosted by none other than BBC Introducing's Phoebe I.H!

-- Line Up --
AN DANNSA DUB (Future Dub from ancient Scotland) 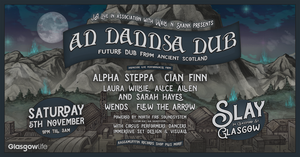