The Admiral welcomes a giant of the Scottish Music Scene Associated with 4AD & Postcard... this is a seated gig over 50% of tickets gone. Book now to avoid disappointment.

At 19, Louise was signed to CBS Records, recording three singles and an album with soul producer Pete Wingfield with the band Sunset Gun. Prior to forming this band with sister Dee and keyboard player Ross Campbell, Louise, along with sister Dee, performed as backing vocalists for Bourgie Bourgie; a band created by legendary Postcard Records' boss Alan Horne.

In 1989, she provided backing vocals from Phil Thornalley's 1988 only solo album Swamp.[1]

As part of the This Mortal Coil collective, Louise's distinctive voice can be heard on the seminal Filigree & Shadow and Blood albums, and as lead vocalist on The Hope Blister's critically acclaimed 1998 Smile's OK album, all of which were released on the 4AD Records recording label. 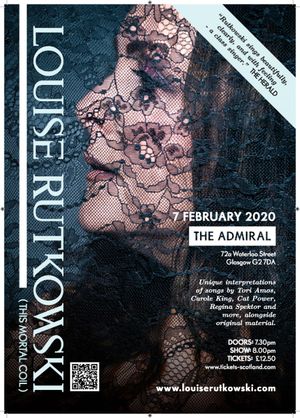