The Sensational Alex Harvey Experience return to The Voodoo Rooms . The band was supposed to be playing the venue earlier this year but illness in the band necessitated a postponement.
Previously purchased tickets will roll forward to this new date. The band has been described by SAHB guitarist Zal Cleminson as ''The Best Tribute out there''.
In an interesting twist, bassist Nelson McFarlane was part of Zal's previous band /sin'dogs/ alongside keyboardist David Cowan who also worked with SAHB bassist Chris Glen with his band ''The Outfit'' as well as performing on studio recordings with SAHB drummer Ted McKenna.
The SAHB Experience are also releasing licenced versions of SAHB classics which are respectful nods to the originals but with a modern flavour. The band play throughout the UK and keeps both the music and the theatrics of SAHB alive in their stage show. This is a gig not to be missed as they will not be back in Edinburgh for some time. Vambo Rool!

THISTLEHURST comprises experienced musicians from throughout central Scotland. The band plays rock/blues originals and covers with some great guitar work and vocal harmonies. Not to be missed 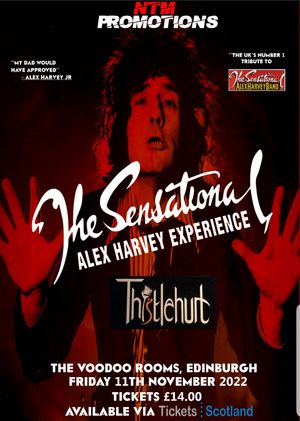