Following their evolution into a live band in summer 2016, the group has toured extensively throughout the UK, EU and North America, including performances at SXSW, Canadian Music Week, Tramlines, S?n, ArcTanGent, Long Division, and Deer Shed Festivals, with sessions for BreakThru Radio and Daytrotter. Their debut LP Body Is Working was received favourably by BrooklynVegan, Stereogum, Exclaim!, Drowned In Sound, the Skinny, God Is In The TV, and Louder Than War, with airplay on BBC 6 Music, Radio 3, Amazing Radio and others. They have subsequently released the single C.R.E.A.M. as part of Long Division Festival’s 12? compilation New Addition, Vol. 1. In 2019 they toured the UK with an expanded lineup featuring two drummers, performing several new songs. In 2020, they released the single I Do as part of the Kingfisher Bluez Record Store Day 2020 compilation, Short Songs, Vol. 2, and Don’t Kill Yourself (It’s Christmas), a benefit fundraiser for Leeds Survivor Led Crisis Service.

Expanding on the need for music to bring joy into the lives of others, and Smith’s fascination with the contortion of the pop song into a uniquely imaginative and immediate form, Living Body aims to exist in a world of skin, confusion and information overload.

“Living Body are THE most exciting thing happening in the UK music scene.” – the Skinny

“Delicate and dramatic indie … they can do high-energy rippers too.” – Stereogum

“…tsunamis of glee” – The Line of Best Fit

“Body is Working is a fascinating curio of an album, and quite beautiful in its complexities.” – God Is In the TV Zine 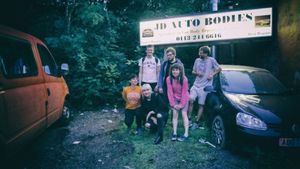