‘From Rattlesnakes to Guesswork’

Please note change of venue , tickets for the new venue have been reserved for all existing customers, and will be reissued at a later date.
* Rescheduled from from 31/1/22 Concert Hall tickets valid for new date *

'Burst on to the scene' is a horribly overused phrase but it's exactly what Lloyd Cole and the Commotions did in 1984 with 'Perfect Skin', 'Forest Fire' and their era-defining album 'Rattlesnakes'. They went from Glasgow clubs to stadiums in 18 months. Hits 'Lost Weekend' and 'Brand New Friend' propelled LP2 'Easy Pieces' to the upper reaches of the album charts all over the world. One last album 'Mainstream' and one last hit 'Jennifer She Said', and by 1989 they were gone.
In 1990 Lloyd Cole launched a solo career and has been making albums ever since. In the early 2000s Cole retreated somewhat from rock/pop, performing mostly acoustically, but his 2013 album 'Standards' took fans, critics, and maybe even the artist himself, aback with its brash electric rock'n'roll sound. It was universally acclaimed, Cole was back on TV, and there was an undeniable demand for some electric band shows. But there was no band. Cole contacted old Glasgow pals The Leopards (Mick Slaven and Campbell Owens) and asked if they might like to play some shows... supplemented by ex Commotion Blair Cowan on keyboards, Lloyd Cole and the Leopards was born 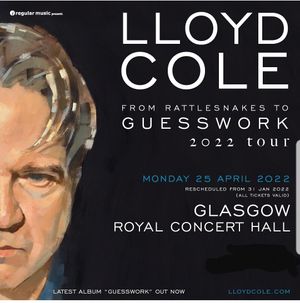