After officially forming in 2000, Grendel has seen consistently
increasing success over the years, with 5 albums and 3 EPs under their belt and plenty of staple & unmissable DJ hits, most notably “Soilbleed”, “Hate This”, “Void Malign”, “Chemicals + Circuitry", "Timewave Zero" and “Severed Nations”. Their most recent milestone album, “Age Of The Disposable Body”, marked new territory for the band and has lead to a full band line up, which has raised their live performances to a whole new level.

Grendel's energetic Electronic Body Music & retro-infused
industrial-rock performance has in recent years headlined a number of European & North American festivals and 2 highly successful 35 date tours of North America, with several sold out shows, receiving high acclaim from both audiences & promoters alike. The band has also shared stages with the likes of IAMX, Nitzer Ebb, VNV Nation, Front 242, Covenant, Clan Of Xymox, Lord Of The Lost and many more. 2019 will see Grendel releasing their new album, offering a huge new milestone in the band's career. To promote this, Grendel will be extensively touring both North America and Europe.

The band's current line up consists of: 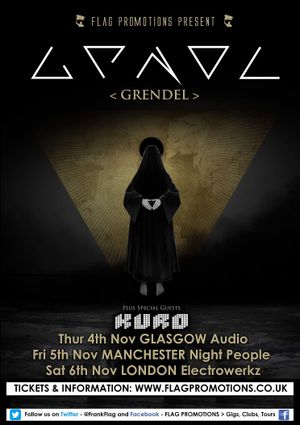