Event is Over Only

The Bonnevilles are a no-frills guitar-and-drums two-piece from Northern Ireland who play hard-hitting roots music they call "garage punk blues." Formed in Lurgan and Banbridge in 2009, the Bonnevilles feature guitarist and singer Andrew McGibbon, Jr. and drummer Chris McMullan. McGibbon was a blues fan whose take on the genre was turned upside down by R.L. Burnside's raucous collaboration with the Jon Spencer Blues Explosion, Ass Pocket of Whiskey. After checking out like-minded acts like the Immortal Lee County Killers and the Soledad Brothers, McGibbon decided to start doing some blues wailing of his own. Teaming up with McMullan, the group began playing out and in 2010 released their debut album, Good Suits and Fightin' Boots. As the band toured in support, both McGibbon and McMullan struggled with the death of a parent, which informed the duo's second LP, 2012's Folk Art and the Death of Electric Jesus. As the Bonnevilles continued to tour the U.K. and Europe, they shared stages with the likes of Bob Log III, the Black Diamond Heavies, T-Model Ford, and Kid Congo Powers. In 2014, the band documented its powerful live show with the album Tape Saturation Overdrive: Live in Belfast. 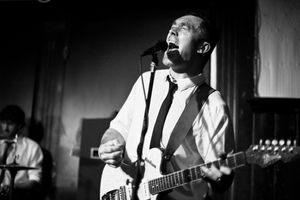 Under The Wires Presents...