“The Coventry rabble making wonky Britpop for a new generation”

If the band were the class clowns of the UK’s new guitar music scene back in those days, however, they weren’t entirely to blame. Fresh out of uni, FEET had been snapped up by the prestigious management company who worked with Foals and Metallica, so they “just went with it” (the two have since parted ways); thrust into recording their debut album, they began work on it mere weeks after drummer Ben Firth had joined the band, and were still scrabbling together material for its second half whilst the first was being recorded. The fact that what came out – 2019’s ‘What’s Inside Is More Than Just Ham’ (a title they all groan over now) – still burst with earwormy hooks and moments of wonky, idiosyncratic excitement seems testament to the obvious talent that lay beneath the tomfoolery all along. The record gained them support from the likes of NME, DIY and Radio One, alongside support tours with Declan McKenna and backing from ex-Maccabee Felix White’s Yala! Records. For a group that could have been perceived as winging it, they winged it pretty well. 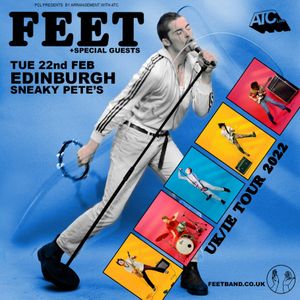