George Murphy is an Irish singer songwriter who hails from the Dublin suburb of Beaumount.
He exploded onto the Irish music scene after his memorable appearances on the RTE Television show “You’re a Star”. Just out of secondary school at the age of 17 he very quickly took over the Irish music scene. He signed to Sony Ireland and his debut album ‘Dreamed A Dream’ went to No.1 in the Irish charts. The album eventually went on to gain triple Platinum status.

George had made a big impact with insiders on the Irish Music scene, Phil Coulter was quoted as saying that George “Is the most exciting vocal find in Ireland”, The late Ronnie Drew was quoted saying “A voice beyond his years”, Peggy Seeger was quoted saying “A very honest approach to the songs, kept them true to their Origin” and Hotpress magazine described him at the time as “A serious contender”.

18+
Please note this is a standing event. 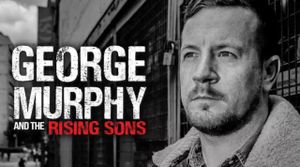