Quiet Houses are an indie-folk duo made up of Edinburgh-bred, Manchester-based Jamie Stewart and Hannah Elliott. In December 2021 the duo released their debut EP ‘Big Town’ supported by singles ‘B-List’ (BBC Radio Scotland track of the week), ‘Cold Water Swimming’ (featured in Spotify’s ‘The Most Beautiful Songs In The World’) and ‘Ocean Avenue’.
The duo are inspired by the indie-folk world of Phoebe Bridgers, Adrianne Lenker and Bon Iver, and the indie-pop likes of Alvvays, Babygirl and Hovvdy. Their songs re hyper-romanticised vignettes depicting devastating and beautiful scenes from early adulthood.
Following sold out launch parties both here at Sneaks and in Manchester for their independent release of ‘Big Town’ we welcome them back as part of our Central Belters season. 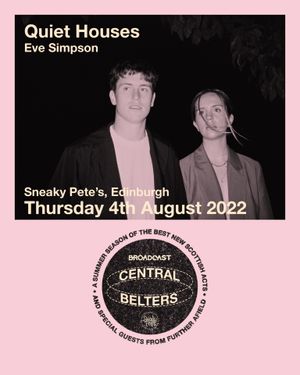