Honing his synthesis of folk and blues for over 50 years, Chris Smither, truly an American original, returns to the UK to perform music from his vast song catalogue in 2022.

Chris’ songs have appeared in films and TV shows and been covered by Bonnie Raitt, John Mayall, Emmylou Harris and Diana Krall, among others. Chris continues to tour festivals, music clubs and concert halls all over the world.

“With a weary, well-travelled voice and a serenely intricate finger-picking style, Mr. Smither turns the blues into songs that accept hard-won lessons and try to make peace with fate.”
New York Times

For this 2022 tour, Chris will be supported by his friend, the excellent songwriter and multi-instramentalist, Zak Trojano. 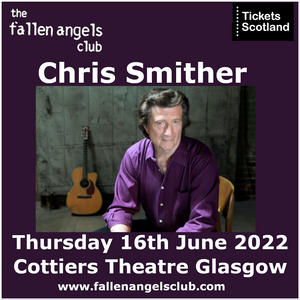