Bad Manners are the best in British ska known for their crazy antics and 2 Tone tracks. Outrageous and enigmatic, they remain as one of the countries best loved live acts. After a hugely successful summer playing festivals all over the UK, South America and Europe, they return to the club scene for their annual Christmas Tour with special guest Punk Legend Max Splodge & local legends Big Fat Panda. By popular demand, this show has been put in place with only 8 weeks to go. Tickets will certainly fly out for this show!!
Dont Miss Out !


“Definitely a “must see” gig for anyone’s to do list. See you down the front!” –
Louder Than War!

Fronted by Buster Bloodvessel (AKA Douglas Trendle) the band formed in London during 1976 whilst all members were still in school together. By 1980 the band were signed to Magnet Records and were regular guests on the Saturday morning kids telly programme Tiswas.

Their hit singles include Lip Up Fatty, Special Brew, Ne Ne Na Na Na Na Nu Nu, Can Can, Walking In The Sunshine, Just A Feeling and their cover of My Girl Lollipop.

Between 1980 and 1983 they spent 111 weeks in the UK Singles chart, they have produced nine studio albums and skanked their way into the world’s hearts. They initially disbanded in 1987 but returned only three years later due to massive public demand. 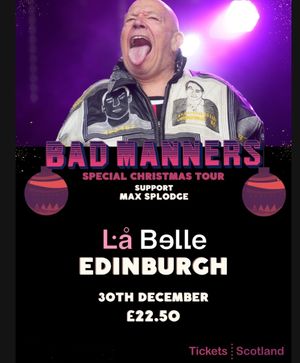