“She came not specifically to celebrate the driving pulsing death disco side of Suicide nor the trippy electro lullaby almost-accessible Suicide but the primal howling Suicide, with a brutal, minimal, animalistic gut punch of a set. Hurtado provided the visceral machine music backdrop with throbbing sub bass, supplementary battle cries but little of the blues that infused some of Suicide’s signature work – until the finale of Frankie Teardrop, a nosebleed electro chronicle of desperation not so far from Lunch’s own pen portraits, which elicited cathartic whoops in the crowd but no encore, suckers, as Lunch declared: “There is nothing on this planet to follow Frankie Teardrop 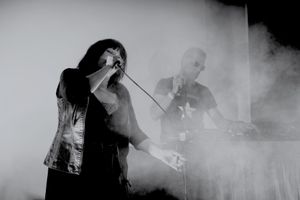