Marseille are a young rock n roll band formed in late 2021 in Derby, England. The band consists of Will Brown, Joe Labram, Lennon Hall, Tom Spray and most recently Felix Moxey. Signed to Birmingham based label ADR Records, the 90's Madchester scene and the 60's Merseybeat is where Marseille draw most their influences from.

In 2022 Marseille, have already had some success with the singles 'Forget It All' which was played on Soccer Am and the 9minute monster 'The Jungle'. Over the summer, the band have also performed at the Y-Not and Isle Of Wight Festivals.

With an average age of 18, Marseille are sure to go far... 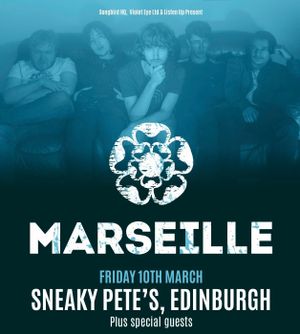