We are thrilled to announce that after an absence of two years, we are finally able to hold our Summer Concert. The setting, once again, will be the iconic Queen Hall in Edinburgh.

We invite you all to join us, and of course, our hard-working pupils for one of the highlights of the year- the annual Summer Concert.

In addition to our regular programme, (full details of which will be revealed nearer the date if the event) the summer concert will feature the fourth work in our Seven Hills Project. This composition is by internationally renowned Alumni Helen Grimes.

Helen was a pupil at St Marys for 2 years, leaving us in 1999. Helen then went on to study oboe with John Anderson and composition with Julian Anderson and Edwin Roxburgh at the Royal College of Music. In 2003 she won a British Composer Award for her Oboe Concerto, and was awarded the intercollegiate Theodore Holland Composition Prize in 2003 as well as all the major composition prizes in the RCM. In 2008 she was awarded a Leonard Bernstein Fellowship to study at the Tanglewood Music Center where she studied with John Harbison, Michael Gandolfi, Shulamit Ran and Augusta Read Thomas. Helen was a Legal and General Junior Fellow at the Royal College of Music from 2007 to 2009. She became a lecturer in composition at the Department of Music at Royal Holloway, University of London, in January 2010.

The piece, entitled 'Braid Hills' is inspired by the poem of the same name by Alexander McCall Smith, is for two horns to be performed by student Robert Johnston and teacher Ruth Brady.

The Queen's Hall has been at the heart of the Edinburgh music scene since way back in 1979, when it was converted from a chapel into a concert hall after a public appeal. The natural acoustics make it beautifully suited to a vast range of music – it is both home to the Scottish Chamber Orchestra and has hosted some of the most memorable rock gigs in recent years (including Frightened Rabbit during Edge Festival 2010). It is also a key host to the Fringe, the Jazz and Blues Festival and the Edinburgh International Festival. 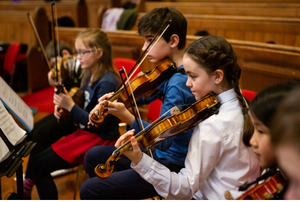