Over 14s, under 16s must be accompanied by an adult

On Sale Friday 2nd September 9am

Finally Edinburgh’s The Filthy Tongues are poised to release their much anticipated debut album, Jacob’s Ladder. But these are no new kids in town. The Filthy Tongues have occupied a unique place at the heart of Scottish alternative rock, in various manifestations, since the mid 80’s.

The core trio, along with the Mackenzies’ keyboardist and backing singer, Shirley Manson, evolved into Angelfish, ably aided and abetted by Taking Heads and Blondie manager Gary Kurfirst, and quickly established a hardcore following as the band appeared in both the UK national and US College charts. They recorded a well-received album in Connecticut with Chris Frantz and Tina Weymouth from the Talking Heads, and the video for the single Suffocate Me caught the attention of producer and musician, Steve Marker, who was actively sourcing possible lead singers for a new project he was working on with fellow musician/producers Butch Vig and Duke Erikson. The project was Garbage. Manson was lured from Angelfish to front the nascent Garbage and the rest, as they say, is history.

The amicable split left behind ‘the most complex, fascinating musical footprint of any Scottish band yet’.
(The List magazine)

2016 and The Filthy Tongues are once more back to the original, ever-dependable trio, but working a revolving-door policy featuring various musical and literate contributors and collaborators. The new eight-track album finds The Filthy Tongues in familiar territory – highly literary musings on their hometown of Edinburgh, but also evocative of such celebrated US Deep South scribblers as William Falkner and Flannery O’Connor, possibly why Nick Cave and The Bad Seed’s classic Delta-Blues First Born is Dead album comes to mind. But it’s definitely an ‘Edinburgh’ album, a journey through the dark, damp closes and stairwells of the Old Town and all that goes with it. It’s claustrophobic, and menacing with nary a glisten of sunlight, but it’s all the more compelling and captivating for that. Martin offers this ‘The LP is pleasingly grotty and more than a bit gothic. All based around a dark neo-feudal Edinburgh’.

In a colourful career the band have worked and toured with Blondie, The Ramones, Chris Frantz and Tina Weymouth, Vic Chesnutt, New York Dolls, Big Audio Dynamite, Aztec Camera and many more.

When listening to The Filthy Tongues, musical critics recognise Pixies, Echo and the Bunnymen, Joy Division, Nick Cave and Scott Walker influences, and other plumbers of the murky musical depths, but the style of this ever evolving band remains strikingly and individually their own. 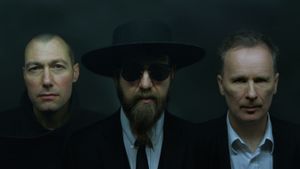