Ozric Tentacles are regarded as one of the most influential bands to emerge from the UK’s festival scene, formed during the solstice at Stonehenge Free Festival 1983 going on to become psychedelic staples at Glastonbury and other festivals. The creative vision of multi-instrumentalist Ed Wynne, the Ozrics’ uniquely trippy soundscapes connect fans of progressive rock, psychedelia and dance music culture. After a prolonged hiatus the band released the 2020 album Space For The Earth (K-Scope). 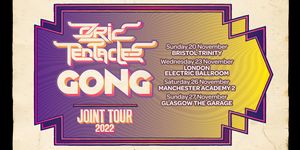