Palaye Royale is a Canadian-American rock band from Las Vegas, formed in 2008 by brothers Remington Leith, Sebastian Danzig, and Emerson Barrett
* Rescheduled from 6/3/22 *

over 14s under 16s with adult
To our loyal Royal Council family—we have been given the opportunity to perform with Yungblud on his upcoming US tour. While we are incredibly excited to be a part of this, we had to make the difficult decision to cancel our rescheduled US tour and some upcoming European headlining dates. This wasn’t a decision that we took lightly, and we will be back to those European cities with new dates very soon. We hope that our fans in the US will be happy to see us on tour with Yungblud on those announced dates. 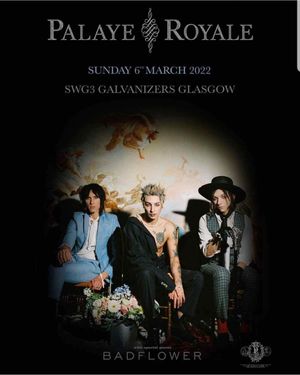