Formed in 2014 Peej (vocals, guitar), Benj (bass, vocals), Ryan (guitar) and Kob (drums, vocals), were drawn together for their love of great music. The band quickly began to combine everything we all love about 1990s/2000s punk rock with classic and hit songs like you’ve never heard before. From the epic-ness of Meat Loaf to the soaring power of a Disney ballad, nothing is off limits to them.

Punk Rock Factory rehearse, write, record, mix, and film everything themselves in their studio called ‘The Sausage Factory’ with a heavy focus on digital content. With an online following of almost a million fans spread across the world’s most popular social media platforms (TikTok making up a huge 500k of those) they show no signs of slowing down. They frequently bring friends along to their music to enjoy the fun and to date the band has had guest performances from members of acts such as Protest the Hero, Bowling for Soup, Ice Nine Kills, Mest, Rufio, Ten Foot Pole, Zebrahead aswell as Encanto star Jessica Darrow and many more. 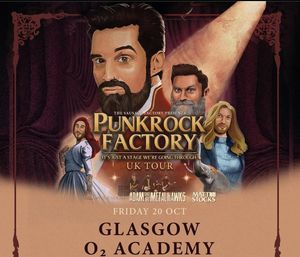