An Ocean Full of Islands Tour

Tide Lines.
In the long ago days of early 2020, Tide Lines had one goal with their second album Eye of the Storm: to translate the band’s word-of-mouth success into something verifiable. Into something tangible that would honour their fanbase and reflect their audience’s passion. Into, in short, a decent showing in the Top 40. Charting a self-produced, self-released album was a big ask. Then again, the Glasgow-based four-piece had already had serious form at self-starting a phenomenon. Through rigorous songwriting and vigorous gigging, Robert Robertson (vocals, guitar), Alasdair Turner (guitar, pipes), Ross Wilson (keyboards) and Fergus Munro (drums) had built up an intense following at home, and beyond.

Developing the folk-rock roots they’d planted with 2016 debut single Far Side of the World ( 7.5 million combined streams and counting) and 2017 album Dreams We Never Lost, Tide Lines were already pushing out from the Scottish heartland. Robertson sang poetically and evocatively of the Hebrides and the Highlands that all of the members call home, but the band’s eyes were on the horizon.

For sure, these were songs formed in the heart and hearth of the folk music that Gaelic-speaking Robertson had grown up with. But like the music of Van Morrison or countryman Mike Scott and his Waterboys before them, Tide Lines’ songs had a universality that reached beyond cultural boundaries.

Then, scheduled for March 2020, was Eye of the Storm, a rousing collection of tracks that were, variously, as wide as the sky and intimate as home. The stars, and the songs, were aligned. Unfortunately, like all of us, the band’s second album was overtaken by events. As lockdown took hold, Tide Lines faced a difficult decision: hold back the album until they could properly promote it, whenever that might be? Or honour the songs and their audience and push on? Quickly, the band decided to follow the music.

“Our fanbase are pretty supportive of us,” says Robertson, who formed the band while studying at Glasgow University. “And particularly at that point, they felt pretty sorry for us! We'd announced the album when Coronavirus was just this thing that was happening in China. So we went ahead, and because of that, our fans were obviously sitting in lockdown. So they're thinking: ‘Well, we've got time in our hands. So let's just support the lads.’” Tide Lines were used to thinking on their feet from day one. Robertson and Wilson first met when the latter stepped in last minute for a gig Robertson had at the Park Bar in Argyle Street, the pair of lifelong musicians rustling up a set within minutes of meeting. Likewise when Munro and Turner joined – within one rehearsal, the foursome knew they were onto something. Later, as the band gained momentum, each member took on non-musical band roles: Robertson on communications, Turner on accounts, Munro on merch, Wilson on studio and technical bookings. Now, unable to promote Eye of the Storm, their DIY/bootstrap skills kicked in. Tide Lines took to social media – and they took to the skies. If they couldn’t tour the world, the world could come to them.

“We did a thing called the Virtual World Tour, which was just a bit of a joke at first. For 10 nights in the lead up to the album release, we had a wee tartan aeroplane on Google Earth,” remembers Robertson with a laugh, shouting out bandmate Wilson’s graphic design skills. “So I’d fly from my house in Fort William to wherever I was supposed to be that night, then livestream a performance from that place.

It was just Robertson and his guitar, so it wasn't exactly how Tide Lines intended everyone to hear their new songs. But in those long ago days of lockdown #1’s new (ab)normal, the strippedback performance format proved one ineffable thing: unadorned, performed from his parents’ house in Fort Williams, Robertson’s new songs could travel. And how they travelled. True to Tide Lines’ hard-grafting, self-starting DIY ethos, their innovation struck a chord.

“Each night of that funny ‘tour’, we had 10,000 views every 24 hours. And of course, we put a link to pre-orders for Eye of the Storm at the bottom at the bottom. So we were just getting preorders in all the time. And that ridiculous idea was something that would never have happened if it wasn't for Coronavirus.”

The result: in its week of release, Eye of the Storm reached the giddy heights of Number 3 in the UK album chart midweeks, before finally landing at a hugely impressive Number 12. By default, desperation and tactical graphic design, Tide Lines smashed it (inter)nationally. At a time when good news was hard to find, here was a sparkle of positivity. As Robertson puts it, “long before Coronavirus, we wanted to make some kind of a statement. And we would have been delighted if we'd been nipped into the Top 20. So Number 12 certainly surpassed those expectations.” 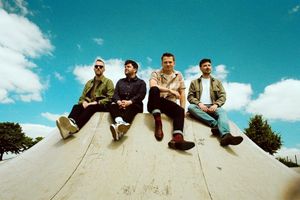