14+. Those aged 14-17 must be accompanied by a responsible adult

Propelled by a fondness for boundless jangle-pop, Toronto’s Ducks Ltd. (formerly Ducks Unlimited) is a duo that operates with the dynamism of a full band: Tom McGreevy (vocals, guitar, bass, keyboards) and Evan Lewis (guitar, bass, drum programming) met at a Dilly Dally show around the time they were both applying for permanent residency and playing in different local bands, quickly recognizing something in each other: a resolute love of underrated ‘80s indiepop a la Sarah Records (for Tom, U.K. groups like Close Lobsters and the Marxist band McCarthy; for Evan, The Go-Betweens and Flying Nun Records).

But impressive knowledge of niche pop music does not make a band: the pair started writing and recording together, taking the time to discover their musical identity. Their critically acclaimed debut EP, Get Bleak, released on Bobo Integral in 2019 and re-released on Carpark in 2021 with three additional songs reveals the key to Ducks Ltd.’s sound: simple charms, just like the music that inspired it, and a project best served when it’s just the two of them trusting the intensity of their creative relationship.

It’s worked out: Ducks Ltd. have played gigs with The Goon Sax, Weyes Blood and Juan Waters; they’ve received glowing praise in publications like Pitchfork, The A.V. Club and NME. But it’s their debut LP, Modern Fiction and its masterful melodies and depressive fun that confirms it: great things are here, and sometimes, all you need is a good friend to realize it. 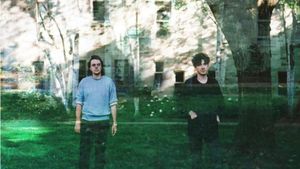