The Twisted Beatles
Gordon Robertson – Vocals
Sheryl Cowie – Vocals
Stuart Coleman – Sax and Keys
Ian Devlin – Guitar
Matt McGoldrick – Bass
Scott Cowie – Drums
The Twisted Beatles are a group of talented musicians who came together during lockdown in a digital fashion and organically started arranging and performing twisted versions of Beatles classics. They became an internet sensation and are now playing live with their debut in Glasgow's Hard Rock Cafe.

The versions range from styles and genres such as but not limited to funk, jazz, rock, country and the strength of the songwriting has proved that the fab four’s classics sound great regardless of what style they are being performed and indeed who is playing them. Make sure you get in to this great show with an early bird ticket before Xmas!! 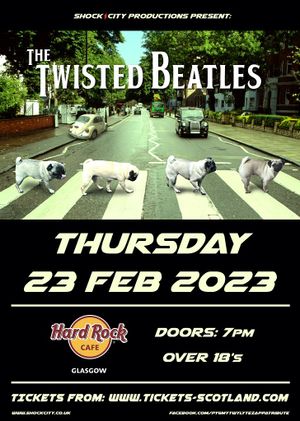