MOVING PICTURES play for over two hours covering all the classics such as Tom Sawyer, The Spirit of Radio and Xanadu (with doubleneck guitars) plus some deeper cuts such as By Tor and later belters such as Far Cry and Headlong Flight.

Featuring drummer Jamie Dunleavey — this young lady from St Andrews is scarily on point.
It takes a unique set of skills to sing AND play bass AND play keys like Geddy Lee — John Power is incredibly accurate.
Guitarist Steve Brown is a lifelong Rush fan and pro player with way too many guitars and wicked sense of humour — not unlike Mr Lifeson!

Moving Pictures are regularly on the bill at Rush fan conventions, have recordings on all 3 Songs For Neil albums and have performed for and recorded with Rush producer Terry Brown. 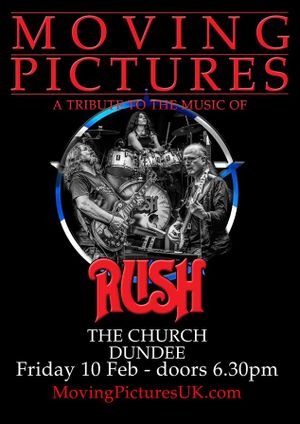