So prolific was Frank Zappa's output, that it is nearly impossible to present a representative sample of his work in just one concert. Nevertheless, Pygmy Twylyte present you with an unmissable evening of Zappa 'classics', if indeed such things exist.

Zappa's 70's and 80's work is the main showcase, though there is the occasional foray into 60's material. Expect some well known tunes such as "Cosmik Debris" and "Montana", interspersed with instrumentals like "Black Napkins" and "Chungas Revenge". The seven strong band will surely bring something to suit everyone's tastes (and maybe even a little of Zappa's trademark wit on the side…). 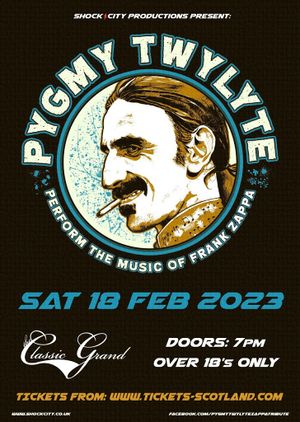