Widowspeak’s sixth album started out with loose strings of a concept, a story about a fictional band:
A chain-stitcher working in the satin district of an unnamed city, a neighborhood of storefront tailors
devoted to elaborate costumery for country-western, art rock, ye-ye cover bands that populate the street’s
bars after dark. The narrator joins one such outfit, “Le Tex” and feels a sense of belonging and
momentum, movement beyond what was previously a stable, predictable life. A relationship with a
bandmate materializes. Eventually, the group start to write originals. They generate goodwill and
momentum, and venture out on the open road seeking new opportunities beyond what the satin district can
of er. But the vibrational energy that got things moving is the same that shakes the whole thing apart: the
relationship, and the band, disintegrate upon finally reaching their destination, the end of the road. The
chain-stitcher heads back to the city, settling back into the rhythm of work, old standards and a familiar
place.
The story is self-referential on purpose: it speaks to the absurdity of ego, codependency and shared visions even as it
celebrates them. The Jacket finds Widowspeak navigating these contradictions, and although its ten tracks now trace
a more abstract arc than the campier initial concept, strands of that earlier narrative remain: “stitches in satin”,
American cities after dark, glimpses of the open road, dark bars, and backstages where things get left behind. The
resulting album is a wizened meditation on performance and past lives from a band who’ve seen their fair share,
hitting their stride now over a decade in. 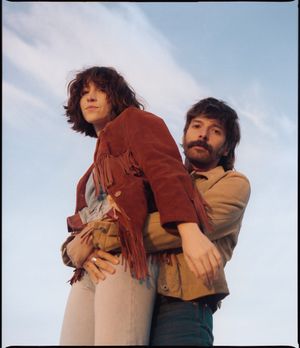