In Dusk We Trust

Over 18's
'dusk - 'the darker stage of twilight'
''A brand new club idea for the clubbers that want to go clubbing , but dont want to come out a club at 3am
Starting at 7pm & ending at midnight.
After his incredible set at the first night, there was only one man to play the second, Justin Robertson!
Getting home from a late night club in Glasgow is almost impossible these days, but we still want to party!
In Dusk We Trust is a brand new clubbing event, that ends in time to not only catch the last train home, but also so as not be completely burst for the rest of the week and wishing you’d never got off the couch in the first place.
The event takes place in the Acid Arch in McChuills, which will be fully blacked-out with lasers, lights, smoke and a full-on killer soundsystem to boot.
This is not an old-school club. It’s contemporary music, but with a few classics dropped in for those hazy memories. In the bar though, its house, balearic & disco classics all night long. 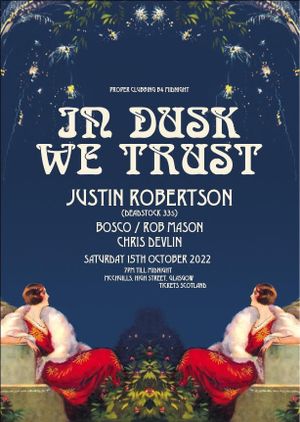