The Grahams
The Grahams are New York grown, Nashville based couple Alyssa and Doug Graham. Growing up as kids in the Jersey suburbs the two would sneak into New York City to hear their favorite bands play, they have been performing together ever since. The band burst onto the scene with their 2013 debut, Riverman’s Daughter, featuring songs written while traveling the Mississippi. The album was a worldwide smash in a booming Americana scene, spending 11 weeks in the Top 40 at radio.

The 2015 follow-up, Glory Bound, influenced by the couple’s train adventure all over America, was declared, “easily one of the best Americana albums of the year” [No Depression]. Rattle the Hocks, a film directed by North Mississippi Allstars’ Cody Dickinson, chronicled the journey and became an international film-festival favorite.

With their new album, comes a new sound. Kids Like Us, is a love letter to timeless pop albums, harkening back to when Brian Wilson & Dusty Springfield ruled the airwaves. Written during a wild motorcycle ride along Route 66, at the height of the 2016 election season, the chaotic stimulus they witnessed was channeled into bold, aching melodies that grew out of motel-room whispers and studio experimentation. “Everything about Route 66 – the neon signs, motels, cars, the menus – are stuck in a different time,” Alyssa says. As a result, the music has moments of fantasy & the supernatural. It’s big, lush, ambitious & profoundly satisfying with its own unique alt pop sensibility. 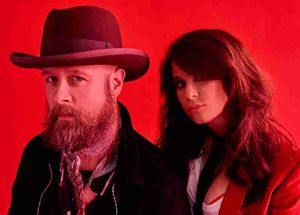