An Oldskool Hogmanay right in the city centre of Glasgow. Ultra-Sonic and a host of original artists from Scotland's amazing Oldskool scene.
We are waiting on your smiley face to fill the dance floor from 8pm so we can bring in the Bells together with the friendliest Oldskoolers - Raving goodbye to 2022 and welcoming in 2023.
We have secured a piper for the bells & an amazing line up of original Scottish artists that helped make back in the day so unforgettable.

Ultra-Sonic will be performing their biggest anthems including Obsession performed live by Heather, taking you higher into the Bells.
The Rhythmic State will be performing their last ever Glasgow show before they retire - lets see them off in style.
Active Forces will be getting together again to bang out their brand of bouncing beats.
Trevor Reilly will be playing the finest Hanger 13 acid tinged bangers with MC Cyclone on the mic.
Joe Deacon will be playing hands in the air Metro anthems.
David Forbes will be dropping the hard stuff.
DJ Ten will be blasting the Happyiest of Oldskool Hardcore
Malcolm X will be warming us all up by taking us from 1989 to 1994. 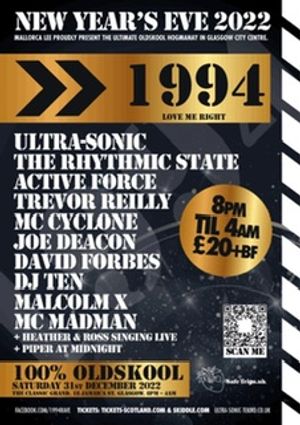