Yes, the one day that was due to come, has been set the final StG Show, in celebrating the 10 years StG is calling it a day but, fear not! rather than going out with a whimper StG are organizing a bit of a knees up with a special show, from all the artists that we have worked with we will have 3 artists in a songwriters circle set up on stage at the same time playing acoustic versions of their songs, telling stories and a small Q&A at the end of the show with the audience.
Ian Prowse, often called the “Scouse Springsteen”, is best known for his work as main man with the groups, Pele (1990s) and the 7-piece group, Amsterdam (2000s). One of his most famous songs, Amsterdam’s Does This Train Stop On Merseyside, was a huge favorite of the late DJ John Peel – he featured the song on his last ever Festive Fifty and it has been well documented that it often reduced him to tears on air. The song has gone on to be covered by many others, including Christy Moore, Miles Hunt and Ian McNabb.
Over the last couple of years Ian has been steadying releasing new material and remastered old material from his Pele days , with his recently Album " One Hand on the Starry Plough " gather rave reviews

Brian Nash ( Nasher ) EX- FGTH:
Thirty years ago a band from Liverpool achieved three number one hits in the charts and followed it with a million selling debut album. Frankie Goes To Hollywood exploded in 1984 and imploded in 1987 leaving “Relax”, “Two Tribes” and “The Power Of Love” as their epitaph.
Since the band’s demise guitarist Nasher has continued to make music. After various band projects he embarked on a solo career in 1995 and has released three albums with a fourth on the way. He recently took time out to write
“Nasher Says Relax”, an autobiography of his life to date as a musician, husband and father of three.
Don’t come expecting Frankie, it would be impossible to re-create most of that
on an acoustic guitar, but there may be a little slice in there somewhere.

Martin Metcalfe ( GBMM/Angelfish/The Filthy Tongues ):
Martin Metcalfe has occupied a unique place at the heart of Scottish alternative rock, in various manifestations, since the late 1980s Firstly as singer/songwriter with UK chart band Goodbye Mr. Mackenzie then morphing in to Angelfish (featuring the vocals of Shirley Manson).
Martin has established a hard core following which is strong, and current, as it was in the days of seminal single The Rattler. More recently Martin has made waves with a new band The Filthy Tongues who created a masterpiece album ‘Jacob’s Ladder’ in 201 n 2018's 'Back To Hell' album. Martin is also an exhibiting visual artist.
Recently Martin has reunited the Mackenzie's with Sien Lien in place of Shirley Manson and the Macs have been playing well received and sold out shows over the UK.

*Original tickets from the Admiral are valid* 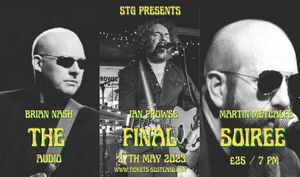