Let award-winning Scottish troubadour Dean Owens and his band transport you to a sepia stained cantina with songs from his acclaimed new Sinner’s Shrine album (recorded with musicians from Calexico) – a unique blend of Scottish roots and Americana, with added desert noir.

A multi talented band including bass, electric guitar and trumpet, with Dean’s searingly soulful voice upfront, conjure the magic of the US desert states, infused with grit and dust from Scotland’s post industrial heartland. Songs of love and lust, sinners and saints, the displaced, the wanderers and the border ghosts.

“more intoxicating than the most treacherous of mezcals…” Rolling Stone

“one of my favourite artists” – Bob Harris (BBC) 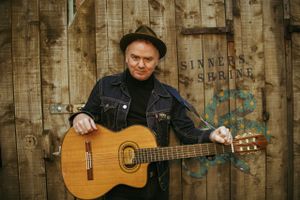