Day of The Dead Glesga

CELEBRATING ITS 4TH ANNIVERSARIO WITH THE BIGGEST FIESTA YET!

The spirit of Mexico’s most famous festival Día de los Muertos - Day of the Dead - is set to return to Glasgow to host its biggest fiesta to date! Following three years of macabre and merriment selling out venues across the city, Day of the Dead Glesga heads east to find a new spiritual home in one of Glasgow’s oldest churches and newest venues, Saint Luke’s.

Rapido Mariachi, Scotland’s best loved sombrero-topped four-piece, famed for their Barrowlands appearance with Canadian art rockers Arcade Fire, will take to the stage to perform their danceable, alternative pop twist on the mariachi tradition. Transporting the fiesta to Mexico City and beyond will be resident Balkanarama DJ Ewan Evans, aka, Señor Poco Loco, spinning an exotic mix of heavy Latin rhythms, classic tunes, and tropical disco. Recreating the festival’s carnival sprit - led by Glasgow’s Janine Fearne (Samba ya Bamba & G.O.D) - dancers & physical theatre performers will pay homage to the afterlife with their interpretive take on Mexican folklore. Facepainters will be on hand throughout the night to metamorphosize partygoers into calavera skulls. And keeping the fiesta fueled, Saint Luke’s bar and restaurant will be offering up a Mexican inspired menu and colourful selection of classic cocktails and spirits. 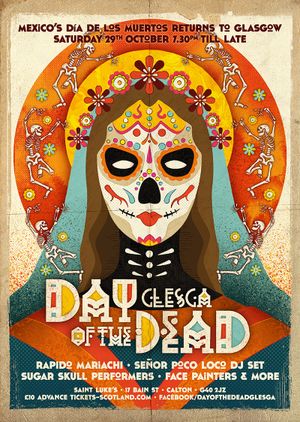