Cola started collaborating in fall 2019 when Darcy and Stidworthy, both formerly of Ought, reached out to their friend Cartwright, who they had frequently met on the road while he was drumming with various other projects. “It wasn’t the post-Ought band right off the bat,” Darcy says, “we really just took time to enjoy the process of collaborating and writing songs together.” The band’s organic chemistry solidified quickly after a few sessions of jamming in-person. Then, as the pandemic began, they were forced to decamp and write songs separately. Working in solitude ended up becoming a “defining color as well as a barrier” to the album, says Darcy. He notes that he wrote the lyrics to “Fulton Park” as a “dream landscape”, a sort of alternative to the frustration and depression he was experiencing at the time.

The resulting record delights in its aversion to superficiality. Although Darcy’s characteristically wry voice remains front-and-center, shifting from decisive to distressed and detached, his lyrical invocations remain only the first key to a much more intricate universe of sound and longing. Individual tracks often feel like small revelations, and each element contributes to a streamlined and yet poetically expansive set of meanings, as the rhythms of the punchy and exuberant guitar parts, urgent basslines, and unexpected drum patterns all tangle with each other in an elegant dance. Much greater than the sum of its parts, Deep in View is an album of artful and energetic post-punk that sparks novel interpretations with every listen, like an object that takes on new shape with each angle from which you hold it. 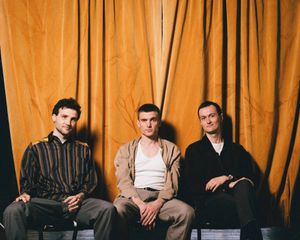