Albert Bouchard and Joe Bouchard are best known as founding members of Blue Öyster Cult. The original band sold millions of albums for Columbia Records with such classic songs as “Don’t Fear the Reaper” and the #1 hit on the Billboard Mainstream Rock chart “Burning For You”.

As songwriters, they wrote many BÖC songs including the very popular “Astronomy” (which was covered by Metallica on their 1998’s release Garage Inc) and the live staples “Cities on Flame with Rock and Roll” sung by Albert, and “Hot Rails to Hell”, sung by Joe. They have both recently revitalized their careers with Joe’s latest release “Strange Legends”, and Albert delivering the first two installments of the Imaginos trilogy, “ReImaginos” and “Imaginos II – Bombs Over Germany”. They are both hitting the road together in 2022 to bring you an intimate look into the Blue Öyster Cult legacy and their solo careers. 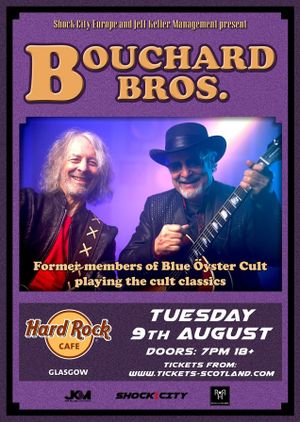