Plus Guests: Oas-is, The Smiths Ltd, The James Experience, The Gerry Cinnamon Experience

It’s true, next year THE CLONE ROSES will be marking their 25th Anniversary together.

Looking to celebrate their birthday in style, the most successful, ambitious, and adored tribute to The Stone Roses, are planning two huge bucket-list shows to honour the occasion; in Scotland and, of course,
Manchester.

After the runaway success of ‘Spike Island – The Resurrection’ – an event that broke records as “the biggest tribute-themed festival the world has ever seen” – The Clone Roses will be taking things to their logical next step when they headline Manchester’s stately Heaton Park (the scene of their idol’s emphatic 2012 reunion gigs).

However, in the run up to ‘Heaton Park – The Resurrection’, The Roses’ devoted fanbase in Scotland will have an opportunity to get-in on the action early as the band confirm a headline slot at the Glasgow Barrowland Ballroom on Saturday 22nd April.

A city that has always had a passionate affinity with The Stone Roses, Glasgow and its devoted fanbase have hosted some of the band’s most memorable moments. From their first and second comings at Glasgow Green (1990 and 2013), to their blistering bowing-out at Hampden Park in what would be their final ever show together in 2017, Glasgow will always have a special place in The Stone Roses story. And in 2023, as they celebrate a milestone achievement of their own, The Clone Roses will be returning to the stage of one of their heroes’ most legendary Glasgow appearances, hoping to rekindle some of that Stone Love.

Promising an evening of wall-to-wall music from Manchester with love, expect a fitting warm-up for the Clones with appearances from a roster of classic band doppelgangers, including OAS-IS, THE SMITHS LTD, and THE JAMES EXPERIENCE; plus a special guest set from THE GERRY CINNAMON EXPERIENCE. 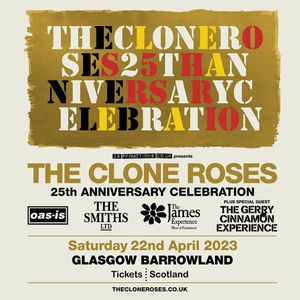