The Sensational Alex Harvey Experience are back playing in Glasgow for the first time in a while. The band has been playing around the UK at various venues including successful appearances at several festivals. The band has recently released licensed versions of SAHB classics which have been reworked and modernised. The first batch is available on all digital streaming and download sites, and the band plan to release an album in 2023 which will include some original material in the style of SAHB. The band has been very well received at gigs during 2022 and will bring an extended Xmas show to the Hard Rock Cafe on 28 December 2022. Expect all the classic SAHB numbers along with a few deeper cuts and some reworked numbers. You can also expect the theatricality associated with SAHB. Alex Harvey jr has been quoted as saying "my Dad would have approved" and Zal Cleminson described the band as "the best SAHB tribute out there". Come along and relive some of the back catalogue of (arguably) the best rock band Scotland has ever produced. Vambo Rool OK? 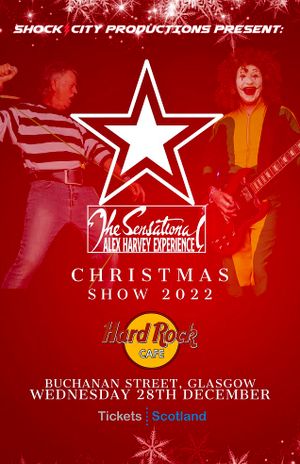