Beltane Fire Festival fuses together drums, fire, dancing and revelry as we delight in the joining of the May Queen with the reborn Green Man.

Honouring our Celtic ancestry and historic celebration of the seasons, this revival of a community pageant marks the beginning of summer and is performed each year by Beltane Fire Society.

Performers enact the ritual story that sees the lighting of the sacred Bel Fire. The procession moves around the hill, with the May Queen at its head, accompanied by her White Women and the Processional Drummers whose distinctive beat gives its own power to the event.

Once the chaotic Reds have joined us and the Green Man has been killed and reborn, the procession is complete but not yet finished. At last we all retire to the Bower to dance, eat and commemorate the changing of the Seasons as invited couples are handfasted by our May Queen. 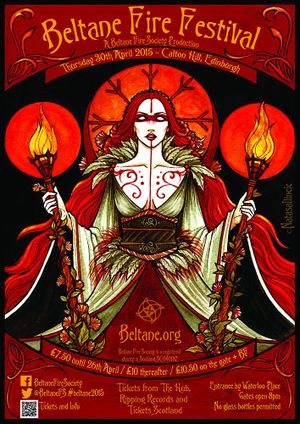