(from the legendary Cold Chisel)

Respected as one of Australia’s iconic musicians, Ian Moss delivers an unforgettable sound – not only as a telling soloist on guitar but especially with his silken voice, ringing with clarity and resonating with pure soul. While primarily recognised as an axeman of tenacity and sweet melodic sensibility, Ian’s distinctive vocal is the essential signature of his soulful, bluesy muse – as it has been since his first tentative foray into music during the early 1970s.
Born and raised in Alice Springs, Ian started playing guitar in local teenage bands but moved to Adelaide after failing one of his high school years, planning to repeat in the big city. Fate intervened when he answered an advertisement for a guitarist in a shop window in 1973, joining the band that was to become a legend in Australia and that made such an undeniable impact that they are now etched in the Australian music psyche forever. That band was Cold Chisel
Moss has released six incredible and dynamic studio albums – The #1 and multi-platinum, Matchbook, Worlds Away, Petrolhead, Let's all Get Together, Soul on West 53rd and the self-titled Ian Moss 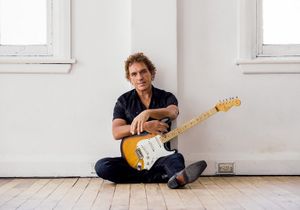