1994 are back with another massive line up to celebrate the release of ULTRA-SONIC & DREAM FREQUENCY album Ultra-Frequency. Both bands will be playing a set of their own anthems and also joining forces later in the night to play an exclusive liveset for 1994. If you had a taste last year, you won't want to miss this ! ULTRA-SONIC will also be joined on stage by the one and only BASS BABY for the first time since Fantazia Big Bang !

We also have legends STU ALLAN along with the original hockey masked hero's of Hardcore DANCE OVERDOSE making thier 1994 debuts and and and MARK SHERRY will be playing an exclusive Oldskool set too. Our amazing 1994 residents are counting down the days, waiting to play your favourite Oldskool Anthems and then some - JOE DEACON (Metro) and MALCOLM X . Master of Ceremonies MC VOYAGER will also be making his 1994 debut.

1994 nights are known for their amazing Oldskool atmosphere, the closest you will experience to what it was like back in the day, created by the friendliest, happiest crowds in the world, lovingly known as the 1994 Rave Family.

So come and join the family, escape the madness and celebrate the good times with 1994. 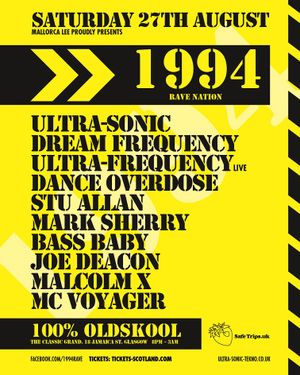